There may be no business like show business for the Scinta family, but for Frank Scinta Jr. and his family, they’ve found there is no place like home at Ridgehaven by Warmington

In Las Vegas, when you hear the name Scinta you likely think of The Plaza Hotel & Casino in downtown. The Scintas, who just resigned a new two-year engagement contract at The Plaza have been wowing audiences in Las Vegas since 2000 with their old school lounge act that combines comedy and musical impersonations. Called a Vegas institution by many, theirs has become one of the town’s must-see shows. This family act has been going strong since its founding members who are siblings, started performing as kids in Buffalo, New York.

It is Frank Scinta Jr.’s dad – called the “soul of the Scintas” – who founded the group and has been its stalwart for years. So Frank Jr. knows show business! And while he traveled and was “on the road” all throughout his youth with his dad and supremely talented family members, Frank Jr. has never had a desire to perform on stage.

He’s a family man and a businessman, and he and his family are happy to enjoy the quieter side of Las Vegas, right outside of Summerlin in their brand new home at Ridgehaven by Warmington Residential in the southwest.

Frank Jr. moved to Las Vegas with his family in 2000 from Buffalo, New York, his hometown and one that he still misses, albeit less now since moving into his new home this past June with his wife, Dominique, and their two children, 6-year-old Frankie, and 2 and a half-year-old Charlee.

“My memories growing up in Buffalo are of neighborhoods, and friends and block parties,” said Frank Jr. “I feel so happy to have found that sense of community again for my own family here at Ridgehaven.”

He said that he really loves that about his new neighborhood. But when he and Dominique set out to find their perfect home, the number one goal was to find something large enough for a family, near good schools. They definitely wanted new, preferably in a small neighborhood where there was a chance to once again enjoy a close-knit setting.

When they discovered Ridgehaven, he said it all fell into place. They chose the Plan 3, the largest home with nearly 2,400 square feet of space, up to five bedrooms, and four bathrooms. Frank said the biggest selling point for Dominique was the very nice kitchen with tons of white cabinets and a huge center island. They both loved the location near Summerlin, the intimate community setting and how close they’d be to good schools.

Las Vegas has definitely become the new Scinta hometown. And while Buffalo, New York may always live in their hearts, Frank Jr. said that Las Vegas has proven it has got heart. They all finally feel at home, on and off the stage.

Warmington Residential has four new two-story, single family neighborhoods in the southwest. They are Ridgehaven, Westbury, Rockpointe and Vistaview. Starting prices begin from the low $300’s and range up to the high $300’s. Among these four neighborhoods, there is a selection of plans that range from approximately 1,590 to 3,386 square feet with three to seven bedrooms, up to five bathrooms and two- and three-space garages. Some are nearing closeout and will offer the highly upgraded model homes for sale in the coming weeks.

For more information as well as maps and directions to all of Warmington Residential’s new home neighborhoods in the southwest, visit homesbywarmington.com/lasvegas.

New home buyers in Mesquite have a brand new opportunity to enjoy a spectacular single level lifestyle at Desert Ridge by Warmington Residential. And this is cause for celebration! As a way to introduce this new neighborhood and welcome the entire community to Mesquite’s newest residential addition, Warmington Residential is hosting a grand opening event from 12 to 4 p.m. on Saturday, February 28.

During the Grand Opening event, guests are invited to tour the newly opened Showcase Home which highlights the open concept single-level living opportunity now available within Desert Ridge in Canyon Crest. The Showcase home also displays the variety of standard and designer appointments that are available among the four home styles, one of which includes an optional second level. Prices at Desert Ridge begin from the low $200,000s.

While guest will enjoy a festive day that will include refreshments, live music, giveaways and other activities, the highlight of the day will be a special guest appearance and ribbon cutting ceremony featuring Al Litman, Mayor of Mesquite, that will be held at noon. 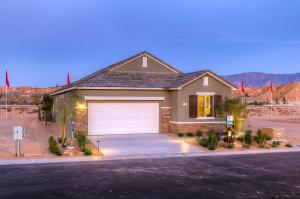 “We are very excited to have become a part of the Mesquite community and really want our Grand Opening event at Desert Ridge to reflect this,” said Greg Oberling, president of the Nevada division of Warmington Residential. “We have been active in Nevada, specifically in the greater Las Vegas area, for 18 years and this is our first opportunity to offer a new neighborhood in Mesquite. We think this city and Desert Ridge are pretty spectacular and we eager welcome all who wish to help us celebrate our Grand Opening here. We feel particularly honored to have Mayor Litman here to officially introduce the neighborhood.”

Offering an outstanding location near the Oasis Golf Club at Canyon Crest Boulevard and Goldwater Alley, the collection of homes at Desert Ridge complements the master-planned setting of Canyon Crest with a variety of traditional high-desert architecture and low-maintenance designs. These homes and this location are perfect for those looking to enjoy a recreation-based, energy-efficient and low maintenance lifestyle opportunity.

The four floor-plan styles range in size from approximately 1,502 to 2,455 square feet and include two bedrooms with the option for a third. All homes feature open-concept living with a great room, covered porches and/or patios, and a direct-access two-space garage.

Desert Ridge has the distinction of being one of Mesquite’s only Energy Star certified collection of new homes, presenting a valuable benefit to buyers who want to conserve resources and enjoy lower utility costs. END_OF_DOCUMENT_TOKEN_TO_BE_REPLACED

“You don’t often hear of a “Grand Closeout” celebration, but in this case, we felt it was worth highlighting the sales success of these three neighborhoods in big way….”

Just a few months ago, Warmington was celebrating the grand opening of its newest San Diego area neighborhood, Seaside Highlands in Encinitas. At that time, Edgehill Terrace in Vista had just recently been introduced to the market and sales at Poinsettia Ridge in Carlsbad were underway, offering area new home buyers a tremendous selection of plans, price points and choice of locations.

Today, Warmington is reporting that this selection of homes is 75% sold out and is announcing the “Grand Close-out” of all three communities. According to Mike Williams, Vice President of Sales and Marketing for Warmington Residential California, strong interest and a quick sales pace has now led to the near sell-out of these popular new home neighborhoods.

The appeal of Seaside Highlands, Edgehill Terrace and Poinsettia Ridge can be traced to the popularity of their respective locations and some unique advantages offered by each.

As Warmington enters the close-out phase at all three neighborhoods, it is showcasing some very special Move In Ready homes that can be fully ready for occupancy in 30 days or less.

“Don’t delay,” advised Williams. “If you are in the market for a new home, you don’t want to miss the chance to purchase within one of these three very special neighborhoods. There is still a good selection of plans but a limited number of homes to choose from so shoppers must act quickly!”

Learn more about each neighborhood and get a map and driving directions now!